French was brought to England by the Normans in 1066. Their language, a Northern French dialect, gradually developed into a distinct variety that is now commonly referred to as Anglo-Norman. Late medieval study aids reflect its continuing importance as a language of English administration, even after its use in oral contexts declined in the later fourteenth century.

By the time that King John lost Normandy to the French in 1204, many of the Norman settlers in England had intermarried with the native population, and some now felt more confident speaking English than French. Walter de Bibbesworth responded to this new situation by writing the first ever French textbook, in or after 1235. His Tretiz was commissioned by Dionysia de Munchensi, Hertfordshire heiress and founder of Waterbeach Abbey, in order to teach her children the vocabulary they would need to run their country estates. The Tretiz shows that French was still being learned in infancy, and used in a wide variety of contexts: Walter’s course ranges from the farm to the banqueting hall. This comprehensiveness made it suitable for more advanced learners, as well as beginners: even though MS Gg.1.1 (displayed in the case Imagining the world) contains several literary texts in French, its compilers still included a copy of the Tretiz.

This page shows the beginning of the Femina nova (‘New woman’, ff. 88r–139r), a late reworking of Walter de Bibbesworth’s Tretiz. The Latin rubric claims that ‘This book is called Femina because, just as the woman teaches the infant to speak the mother tongue, this book teaches young people to speak French eloquently.’ In practice, this claim was optimistic: the only surviving copy includes a complete Middle English translation, but this often misinterprets the text. An unusual pronunciation key has been included at the foot of the page, suggesting that the manuscript’s intended audience was not confident with spoken French. (Sources University of Cambridge, https://exhibitions.lib.cam.ac.uk/moving-word/artifacts/trinity-ms-b-14-39-40-f-88r/) 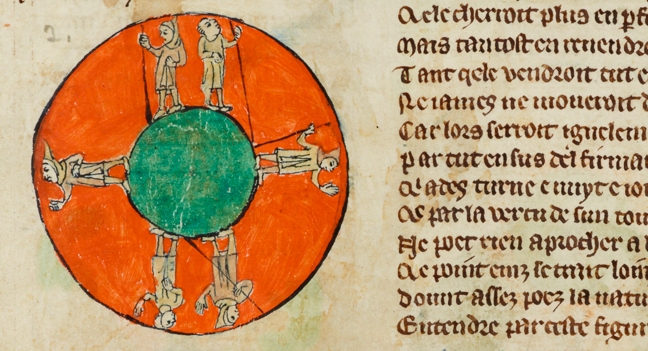 From the point of view of competence and linguistic awareness, already by the 1160s speakers had begun to notice differences between Anglo-Norman and Continental French. More than two centuries later, in his Canterbury tales, Geoffrey Chaucer (London, 1343–c. 1400) still wrote of his upwardly-mobile Prioress:

‘And French she spoke full fair and fetisly,
After the school of Stratford atte Bowe
For French of Paris was to her unknowe.’

She pronounced French ‘fetisly’ (‘elegantly’), but she spoke the French of England. Whilst the language remained a desirable social accomplishment, the late-fourteenth and fifteenth-century manuscripts displayed here attest to increasing uncertainty about French composition and pronunciation. However, French remained an important language for all uses, from local administration to upper-class conversation, until the end of the Middle Ages.