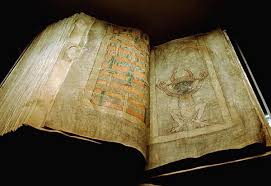 The Codex Gigas contains five long texts as well as a complete Bible. The manuscript begins with the Old Testament, and it is followed by two historical works by Flavius Josephus who lived in the first century AD. These are The Antiquities and The Jewish War. 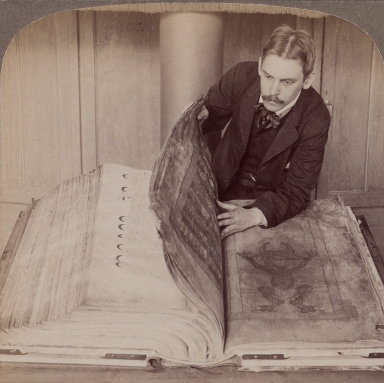 The Codex Gigas or the Devil’s Bible at the National Library in Stockholm is famous for two features. First, it is reputed to be the biggest surviving European manuscript. (Codex Gigas means ‘giant book’.) Secondly, it contains a large, full page portrait of the Devil.

The portrait of the Devil is the most famous image in the Codex Gigas , and it is the cause of the the book’s nickname, the Devil’s Bible. The Devil is shown alone, in an empty landscape, within a frame formed by two large towers. He is crouching with his arms held up (he has only four fingers and toes) and wears an ermine loin cloth. Ermine is usually associated with royalty, and its use here is to emphasise the position of the Devil as the prince of darkness.

The portrait was intended to remind the viewer of sin and evil. It is opposite a page with a representation of the Heavenly City and the two pages were deliberately planned to show the advantages of a good life and the disadvantages of a bad one.

Portraits of the Devil are common in medieval art, but this one in the Codex Gigas may be unique in books for showing him alone and occupying a whole page.

This site contains a digitised version of every page of the manuscript as well as commentaries on its history, texts, script, initials and decoration.

The Highlights contain a selection of images from the manuscript. About the Codex Gigas presents a short introduction to the manuscript; Read more includes a commentary, augmented by a number of transcribed and translated shorter texts. The glossary and biographical addenda can be used as study aids.

Starting in May 2013, the original manuscript is on display for the general public in a new exhibit, “Treasures”.

Codex Gigas, otherwise known as ‘the Devil’s Bible’ is the largest and probably one of the strangest manuscripts in the world.

It is so large that it is said to have taken more than 160 animal skins to make it and takes at least two people to lift it. It measures approximately 1 metre in length.

According to legend, the medieval manuscript was made out of a pact with the ‘devil’, which is why it is sometimes referred to as the Devil’s Bible. It was written in Latin during the 13th century AD, and although the origin of the manuscript is unknown, a note in the manuscript states that it was pawned in the monastery at Sedlec in 1295.

Codex GigasThe story behind the making of Codex Gigas

(“the giant codex”) is that it was the work of one monk who was sentenced to death by being walled up alive. Indeed, an analysis on the text does suggest that it was written by just one scribe due to the level of uniformity throughout. The legend says that the monk produced the manuscript in just one night… with the devil’s help. However, it is not known where this legend started and it is suspected that it was religiously propagated.

Stories and legends say that the Codex Gigas brought disaster or illness on whoever possessed it during its history. Fortunately, the National Library in Stockholm, where it is currently housed, appears immune to the curse of the codex!

Codex Gigas contains a complete vulgate Latin translation of the Bible as well as five other major texts. It begins with the Old Testament and continues with ‘Antiquities of the Jews’ by Flavius Josephus (1st century AD; ‘Encyclopedia Etymologiae’ by Isidore of Seville (6th century AD); a collection of medical works of Hippocrates, Theophilus and others; the New Testament; and ‘The Chronicle of Bohemia’ by Cosmas of Prague (1050 AD).

Smaller texts are also included in the manuscript with the most famous ones including: text on exorcism, magic formulas, a picture of the Heavenly City, and a full page illustration of the Devil. The illustration is the reason why legend says the codex was written with the devil’s help.

According to the National Geographic, it would take one person working continuously, day and night, for five years to recreate the contents of Codex Gigas by hand (excluding the illustrations). Therefore, realistically it would have taken at least 25 years for the scribe to create the codex from scratch. Yet, all this time, the writing retained an incredible uniformity from start to finish. This may be the source of the legend which says that the monk wrote it in just one day.

The manuscript is currently displayed at the National Library in Stock 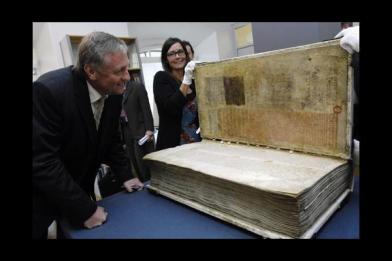 holm where you can also view the digital pages of the Codex. Anyone in Sweden should pay a visit to the see Codex Gigas – and do not be afraid, it is quite safe to read the so-called Devil’s Bible!