L’Escale, use a silent video to make students talk!

Here I used one of my favorite short movies,  L’escale by Eléa Gobbé-Mévellec, and produced by Nostromo. Festival d’Anncey 2009.

This form of “silent” story is ideal in any class which encourages critical thinking and writing in general.
In the case of the Language learners, different levels get easily involved.

Beginner level students will be asked to describe what they see. Instructions will involve asking the students to review certain vocabulary and adjectives; they can talk about colors, clothing, and the weather among other. Of course they will be encouraged to learn more useful vocabulary and practice the grammar concepts they have been exposed to in class. For instance in the context of French class: this type of storytelling provides students with an excellent chance to practice their reflexive verbs. More generally, they will then tell the story as they see it, as well as try and imagine what will happen next. Students will be thrilled to learn some vocabulary that falls outside of the general “beginners package,” to describe events occurring in a bar and the working on a boat.

Intermediate students will be asked to describe in more precise detail life abroad as well as the debarkment of sailors and their experiences in a bar. They will be invited to narrate the story using more complex tenses (including pluperfect, or future perfect.) They will build more elaborate hypotheses using different forms of conditional, in order to extrapolate on “what the two protagonists could have done.” This type of storytelling provides students with an excellent chance to practice any grammar form that has been approached in class.

The advanced students will develop a more critical opinion. They could debate on the stereotypes surrounding the female characters in the bar as well as the characterization of the strong mariners. They can also analyze the harsh labor conditions on a boat, the exploitation of the ocean, the disappearance of manual professions and many other points of debate. These students will not be limited in their discussion. They may act as the film critics, and write a blog analyzing the films artistic quality or on other aspect that interest them.
This silent movie will allow the beginner students and the experienced students alike to access more elaborate material and advance their writing. The beginners experience is not limited to the basic plot line. He will be introduced to culturally challenging material that will trigger his interest and inspire him to further his exploration of the subject.

Moreover, when the students in the lower level are able to see the writings of those more advanced, they have something to aspire to and something which motivates them to continue their efforts in the learned language. Writing spurs on oral discussion and further debates which may be had thanks to the use of voice thread and videotaping. These technological adjuncts allow students to feel more comfortable with one another and the professor. Ironically, this “silent” story obtains a voice, as our students not only write out their analysis, but also orally discuss it through a technological medium .

2) Écrire un petit texte environ 40-50 mots (your little text is related to your picture – you can use some of the text you worked on during Friday’s team-quiz). 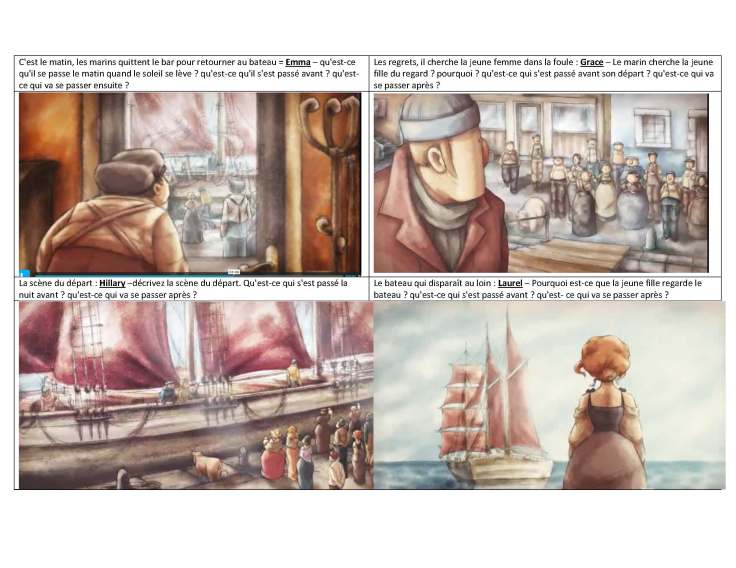 43 thoughts on “L’Escale, use a silent video to make students talk!”